I own 10 black t-shirts. Three from Gap, four from H&M, one from Buffalo and two from Gilden. When it comes to blue t-shirts I have at least 5, I probably have 3 grey tees, maybe 3 in white, and I even have 2 yellow t-shirts (don’t ask). The crazy thing is that all of this is still not the entirety of my solid colored tee collection. With the count up to 23, we still haven’t discussed how many red, pink, or green tees I own. We have yet to even touch graphic t-shirts, let alone polos, button-downs, and full sleeves. Hell, we haven’t even talked about pants yet.

Let me tell you up front, I have clothing for all occasions, from weddings to lounging with friends. I have enough clothes for everything that comes my way. Realistically, if I periodically wash and ration properly, I would not need new apparel for at least a decade. Yet none of this stops me from shopping.

The only reason I’m never deterred from my desire to consume is that I perceive my behavior to be relatively normal. I don’t feel like I’m shopping alone in my favorite stores – actually, it feels as if I am always waiting in lines. In my mind, I like to think that everyone around me is out shopping too. Who can resist a good deal? Two for one? I’ll take six! Shopping is something that gives me a ton of confidence. When I look good, I feel good.

None the less, I recognize that my wardrobe is a bit excessive (Narnia could be hiding behind it). All of this has made me think about clothes a lot lately, specifically how clothing is consumed. Am I really normal in the way I make purchases or do other people do it differently? I decided to look at the facts.

How Much Do We Love Clothes?

My grandmother has only one shirt in her wardrobe. My mother has three. My daughter’s generation, 50. And 48% of them, she never wears. — Jack Ma, Founder and Executive Chairman of Alibaba Group 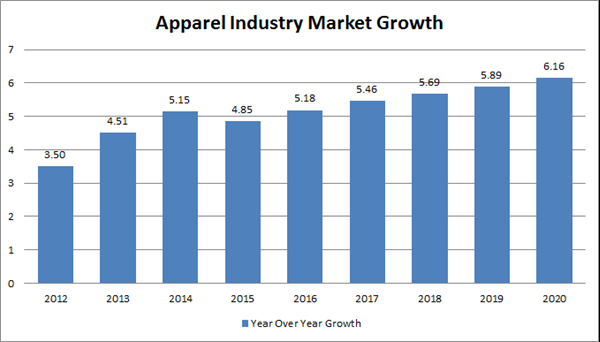 According to MarketLine, a business information company, the global apparel industry has been growing at a 4.78% yearly rate since 2011. Now valued at nearly $1.4 trillion dollars in sales for 2017, the industry shows no signs of slowing as the market is projected to experience 5.91% yearly growth over the next three years.

By 2020, the market size of the apparel industry is expected to reach a mind-boggling $1.65 trillion sales in US dollars worldwide. I was shocked when I discovered this as it amounts to a whopping 60% increase in the market size since the $1.05 trillion dollar pool in 2011. 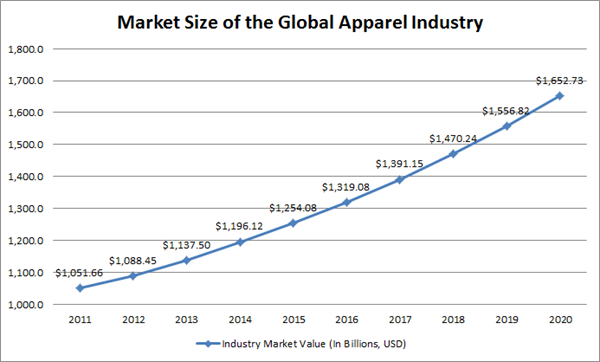 Simply put, this rapid growth means that the average consumer in the world is now buying more than 1.5 times the amount of apparel they did just 6 years ago. (If that doesn’t knock your socks off, I don’t know what will.)

To give you some enhanced perspective, the Worldbank claims that the growth in global GDP from 2011 to 2015 meets an average rate of 2.70%. If we compare the growth of clothing consumption from that period, which MarketLine stipulates to be 4.50%, with the 2.70% average growth in global income, we clearly see something happening: Each year we are more than proportionately increasing the amount of money we spend on clothing.

All figures come from MarketLine.

Statistically then, it’s clear that people have a greater interest in shopping than they have had in previous years. Which means that my consumption of clothing, though undoubtedly expansive, really isn’t that insane of a deviation from the norm.

With apparel market growing faster than the global economy, we should expect closets to burst as consumers continue to stuff their wardrobe with increased clothing expenditure.

It seems like these days we have more stuff than we can ever dream of, an estimate by the LA Times even shows that the average US Household holds 300,000 things. But why in the past 6 years has there been such a spike in clothing consumption? Is it because we’ve never had enough clothing historically? That argument doesn’t really hold up, as pre-2011 wasn’t exactly the clothing dark ages.

Personally, I believe it has to do with the way that fashion is evolving. I believe that if we want to understand why sales figures keep getting higher and higher, we might learn something from examining the emergence of fast fashion in the 21st century. So let’s examine fast fashion: the place where cheap and trend-heavy outfits are king.

Fashion constantly changes and so do our customers. — Stefan Persson, son of H&M Founder Erling Persson

When it comes to clothing it’s no secret that people want to be trendy. We want to look good in front of our friends and we also want to flex our fashion muscles when it comes to meeting strangers (Or maybe that’s just me). But in a world of Balenciaga, Hugo Boss, Armani Exchange, and Rolex how does one look swanky without breaking the bank? Look no further than the precarious world of fast fashion.

Fast Fashion retailers produce clothes that embody the style and fashion trends of the modern world. They transform the designs of high society brands (such as Louis Vuitton or Prada) into their own mass produced items that are inexpensive for consumers and bear a strong aesthetic resemblance. Companies like H&M, Zara, Uniqlo and Forever 21 fit this mold as these sorts of brands tend to produce low-cost mimics and basic essential pieces that rotate company shelves frequently.